The Quest for a Queen
​Dean Brand 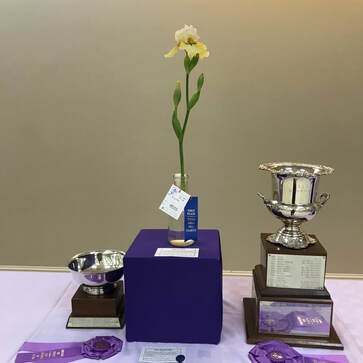 When asked to write this article I had no idea how difficult It would be to put down on paper, in some sort of logical progression, the techniques utilized to be a consistent winner at iris shows. There are so many different things one can watch for and do, to assure that quality entries are available and many of these vary according to one’s objectives; i.e. are you trying to win a blue ribbon or to take Queen of Show.

Whatever the objective, there are only two absolutely essential requirements for winning consistently. These are a respectable iris planting and the willingness to spend the time and effort necessary to present quality specimens. The bigger the planting, the less time and effort necessary, as you have so many more prospective stalks from which to choose. When I won my first Queen and my first Silver Medal, I had only about 50 varieties and few plants of each, therefore I had to be very diligent to come up with enough good stalks. Now with some 2,200 varieties, many with large clumps, it’s more or less just a matter of keeping a watchful eye on the best stalks and assuring that they bloom at show time.

It goes without saying that the first thing one must do is to practice good cultural procedures. Obviously you are not going to win ribbons if you don’t have anything to enter. Clean your beds in early spring and watch for early signs of leaf spot, as once this gets started it can spread rapidly and render your plants unsuitable for showing. Heavy infestations of aphids can be washed away with a garden hose equipped with a spray nozzle or, if you must, with Malathion or some other garden insecticide. I prefer not to use any chemicals except as a last resort and usually aphids do little damage unless plants are heavily infested.
When the stalks start breaking fan, check plantings often and watch for promising stalks. The most important thing to watch for is proportion. If the variety has large blooms you should have a thick sturdy stalk; smaller blooms require smaller stalks. Ideally buds should be on well spaced branches covering approximately the top 2/3 of the stalk, however this is an area where you can overcome serious faults with prudent grooming later.

Next in importance is the number of open blooms you will have. This is one of the areas where it will make a difference in whether you are after a blue ribbon or a queen. One open bloom is often sufficient to win a blue ribbon although two open is preferred just in case someone else has a similar stalk of the same variety with one open. If your objective is Queen of Show, you can forget any Tall Bearded with only one open bloom. They almost never win. You will need at least two open to have a reasonable chance. We often hear instructors at judging schools complain that too much emphasis is placed upon the number of open blooms. I’m not sure this is necessarily true. I think most judges in our area consider all qualities when judging and I have seen a lot of stalks with 3 open blooms which were not awarded first place ribbons. However, when choosing Queen of Show you can be sure you will not find a good judge who will choose a stalk with two open blooms over a stalk with three or four open blooms, all other things being equal. After all when it gets down to choosing a queen, they are looking for the best specimen of the show and if all other qualities are comparable, the extra blooms are that little something extra.

To get two or three open blooms sometimes requires a little help. I have found very few varieties that will consistently open three blooms together on their own. What you can do depends on how far apart the progression of bloom is going to be. Usually the terminal will bloom first. If it appears that.it will bloom 2 or 3 days ahead of the other buds you can try wrapping it; if it’s going to bloom more than 3 days ahead of the other buds, lt’s best to very carefully remove it. Of course you must have a back up terminal bud which can be induced to bloom with the other buds. I have had little success with the first method but have been very successful with the latter.

Next comes branching. Look for a stalk which will space the flowers so they do not appear bunchy. Candelabra type branching is best. On varieties which hold blooms close to the main stalk or at an unattractive angle, appearance can be improved dramatically by inserting spacers of tightly folded tissue paper between the branch and the main stalk. This will encourage the branch to spread out and hold the bloom away from the main stalk.
Next look at the foliage. For a quality entry, all foliage which cannot be removed or trimmed without detracting from the specimen should be clean, of good color, and free from disease. Now that you’ve found your great stalk, stake it so it doesn’t get knocked over, make a note so you don’t forget it’s there, and tag it so you don’t rush out with a flashlight in the middle of a hailstorm to cut it and bring it in and then forget what variety it is.

If winning Sweepstakes is your objective it’s a good practice to concentrate on those varieties that few people in your area grow. It’s often much easier to win a blue ribbon if only one specimen of a variety is entered. Also you want to stay away from those varieties with a quirk (i.e. curl in the petals, doesn’t open out fully, has an odd shape, etc.). Judges can’t be expected to be familiar with every variety and might consider this quirk a fault. One of the most beautiful stalks I’ve ever seen of BLUE PETTICOATS got no ribbon at a Tulsa show several years ago, apparently because the judges weren’t aware of the way it folds the fall edges over when fresh. I once got a red on a stalk of SMOKED PEARL which I was sure was a queen contender. Because of what I consider an exquisite little curl at tips of falls, the judge thought it was folding, when in fact I had worked on it half the night to get it open.

Getting the selected stalks to bloom at show time presents the greatest challenge and requires a great deal of luck. However sometimes one can hurry them up a bit or slow them down considerably. To push bloom forward try watering if the season has been dry. This will sometimes spur them to bloom earlier. Some varieties can be forced to bloom a few days earlier by cutting, setting in warm water, and placing under a light in a warm and humid area. To try this the bud should be showing at least 1/2 color. To hold back bloom, cut stalk when buds are showing complete color and are fat but still fairly tight (if it would bloom in the garden overnight, it’s ready). Wrap the stalk loosely in florist paper, set upright in container of cold water, and place in the refrigerator. With either of these methods you are apt to ruin some stalks so prepare more than you expect to enter. One year I removed the stalks from the refrigerator, carefully unwrapped them and lined them up on the dining room table to open overnight. When I got up the next morning the stalks were all bent over the top of the containers with the blooms hanging upside down. I had the refrigerator too cold and the stems had frozen. When they thawed they collapsed. Needless to say I was a little short on entries that year.

The best way I’ve found to transport irises to the show is to borrow a van or enclosed truck and use the rolled newspaper tactic taught by Ron Mullin at a TAIS meeting several years back. Roll a folded section of newspaper loosely around your thumb and place a rubber band around the roll. Place rolls upright around the sides of a five gallon bucket with 4 or 5 inches of water in the bottom. Place a rock or other heavy object in the center of bucket to help hold the rolls in place. and to prevent the bucket from tipping over when you go around a sharp turn. Stuff crumpled newspaper in the bucket to hold the rolls in a fairly rigid position. Push the iris stalk down through the hole in roll far enough so they reach the water in the bottom of the bucket. I usually place a stalk in every other roll, but this really depends on how many you can place so they don’t bump against each other. Particularly fragile varieties or potential Queen of Show stalks are usually placed in individual containers set in a weighted box and packed with crumpled newspaper to keep them firmly in place.

If you intend to enter a number of stalks, it is recommended that you take them to the exhibition hall the day before the show and complete preliminary grooming while the hall is relatively uncrowded. Set them in an out of the way corner but do not enter them. You don’t want to have an entered specimen go down overnight and in the meantime discover a fantastic stalk in the garden which you overlooked.

On show day, get up early and make a last trip around the garden to make sure you didn’t miss any great stalks. In warm weather it is sometimes amazing how fast some irises will bloom. That one you thought would not bloom for another three days may have opened overnight. Get to the hall as early as possible so you have plenty of time to complete grooming and beat the entry deadline. If you have more stalks than you are allowed to enter, start with the best ones first and groom them to perfection. Grooming counts for 25 points on its own and can greatly enhance cultural perfection which counts for 75 points. Always keep in mind that the idea is to prepare the individual stalk so that it presents the best possible appearance.

Some of the more important grooming procedures are:​
Once you have entered all specimens, unless you have an assignment connected with the show, leave the hall and have a leisurely breakfast. Judging usually takes about 3 hours for a good sized show. Return when the show opens and if all goes according to plan and if Aunt Dorothy (Howard) didn’t enter her always fantastic specimens; “BEHOLD”, there sits your pride and joy encircled with rosettes and silver.

This was written with the tall bearded iris in mind as that is mainly what I grow. Most everything would also apply to border bearded. I’m sure not everyone will agree with my methods but they have worked extremely well for me. The main objective is to have fun. If you are not having fun then it’s definitely not worth all the work.